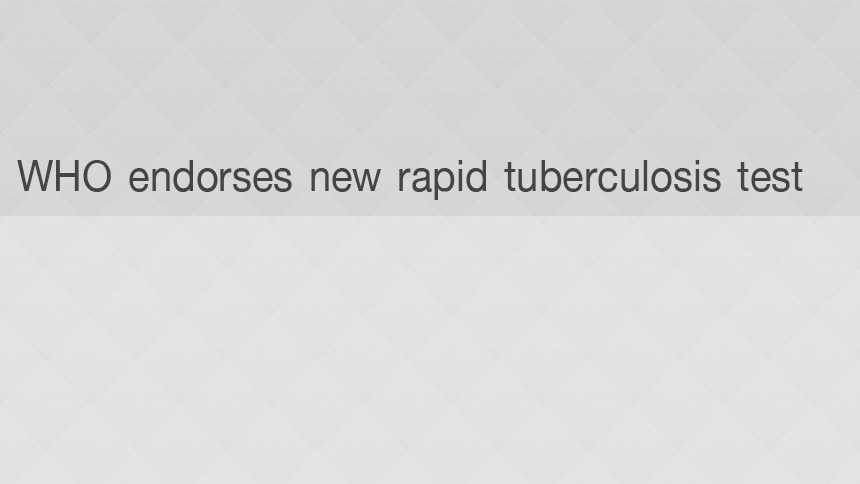 A major milestone for global TB diagnosis and care 8 DECEMBER 2010 | LONDON | GENEVA — Today, WHO endorsed a new and novel rapid test for tuberculosis (TB), especially relevant in countries most affected by the disease. The test could revolutionize TB care and control by providing an accurate diagnosis for many patients in about 100 minutes, compared to current tests that can take up to three months to have results.

A major milestone “This new test represents a major milestone for global TB diagnosis and care. It also represents new hope for the millions of people who are at the highest risk of TB and drug-resistant disease.” said Dr Mario Raviglione, Director of WHO’s Stop TB Department. “We have the scientific evidence, we have defined the policy, and now we aim to support implementation for impact in countries.”

WHO’s endorsement of the rapid test, which is a fully automated NAAT (nucleic acid amplification test) follows 18 months of rigorous assessment of its field effectiveness in the early diagnosis of TB, as well as multidrug-resistant TB (MDR-TB) and TB complicated by HIV infection, which are more difficult to diagnose.

Increase in diagnosis
Evidence to date indicates that implementation of this test could result in a three-fold increase in the diagnosis of patients with drug-resistant TB and a doubling in the number of HIV-associated TB cases diagnosed in areas with high rates of TB and HIV.

Many countries still rely principally on sputum smear microscopy, a diagnostic method that was developed over a century ago. But this new ‘while you wait’ test incorporates modern DNA technology that can be used outside of conventional laboratories. It also benefits from being fully automated and therefore easy and safe to use.

WHO is now calling for the fully automated NAAT to be rolled out under clearly defined conditions and as part of national plans for TB and MDR-TB care and control. Policy and operational guidance are also being issued based on findings from a series of expert reviews and a global consultation held last week in Geneva. The consultation was attended by more than a hundred representatives from national programmes, development aid agencies and international partners.

Affordable assessment
Affordability has been a key concern in the assessment process. Co-developer FIND (the Foundation for Innovative and New Diagnostics) is announcing today it has negotiated with the manufacturer, Cepheid, a 75% reduction in the price for countries most affected by TB, compared to the current market price. Preferential pricing will be granted to 116 low- and middle- income countries where TB is endemic, with additional reduction in price once there is significant volume of demand.

“There has been a strong commitment to remove any obstacles, including financial barriers, that could prevent the successful roll-out of this new technology,” said Dr Giorgio Roscigno, FIND’s Chief Executive Officer. “For the first time in TB control, we are enabling access to state-of-the-art technology simultaneously in low, middle and high income countries. The technology also allows testing of other diseases, which should further increase efficiency.”
WHO is also releasing recommendations and guidance for countries to incorporate this test in their programs. This includes testing protocols (or algorithms) to optimize the use and benefits of the new technology in those persons where it is needed most.

Though there have been major improvements in TB care and control, tuberculosis killed an estimated 1.7 million people in 2009 and 9.4 million people developed active TB last year.