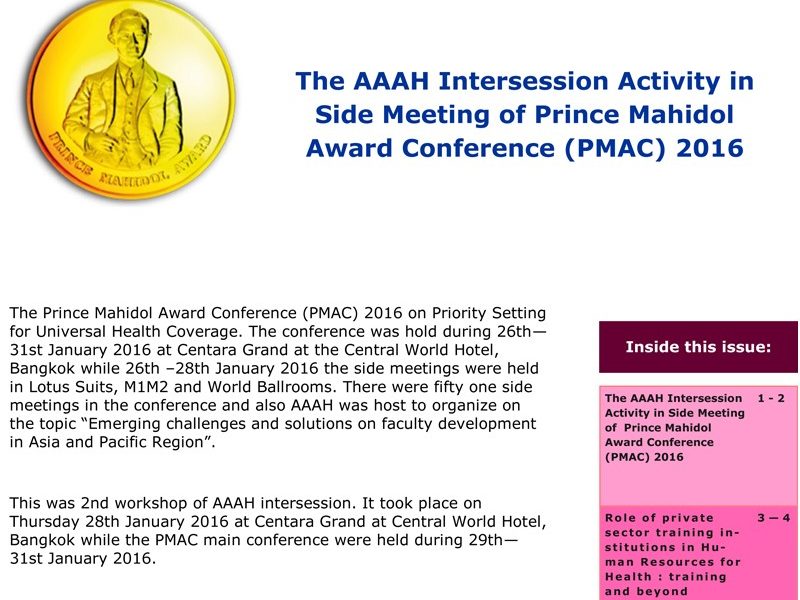 The Prince Mahidol Award Conference (PMAC) 2016 on Priority Setting for Universal Health Coverage. The conference was hold during 26th—31st January 2016 at Centara Grand at the Central World Hotel, Bangkok while 26th –28th January 2016 the side meetings were held in Lotus Suits, M1M2 and World Ballrooms. There were fifty one side meetings in the conference and also AAAH was host to organize on the topic ―Emerging challenges and solutions on faculty development in Asia and Pacific Region‖.

This was 2nd workshop of AAAH intersession. It took place on Thursday 28th January 2016 at Centara Grand at Central World Hotel, Bangkok while the PMAC main conference were held during 29th—31st January 2016.

The objective of this workshop aimed to monitoring progresses and Synthesis of prelim findings of six proposals from five countries (Bangladesh, China, Lao PDR, Philippines and Thailand) in term of review literature, method, preliminary of result and developed tools. And also the plan of the next step to follow common protocol and follow up activities during 2016.

This workshop was attended by nineteen participants. Principal investigators came to presented the progress of their results.